Visit Awash National Park by vehicle en route to Harrar and fly back to Addis Ababa.

Drive from Addis Ababa to Awash National Park for lunch passing through the young volcanic landscape of this scrubby desert fringe. Explore this dry savannah park for its birdlife and wildlife in the afternoon and gaze into the Awash River gorge. Avoid the lazy crocodiles and cheeky monkeys at the Awash River Falls. 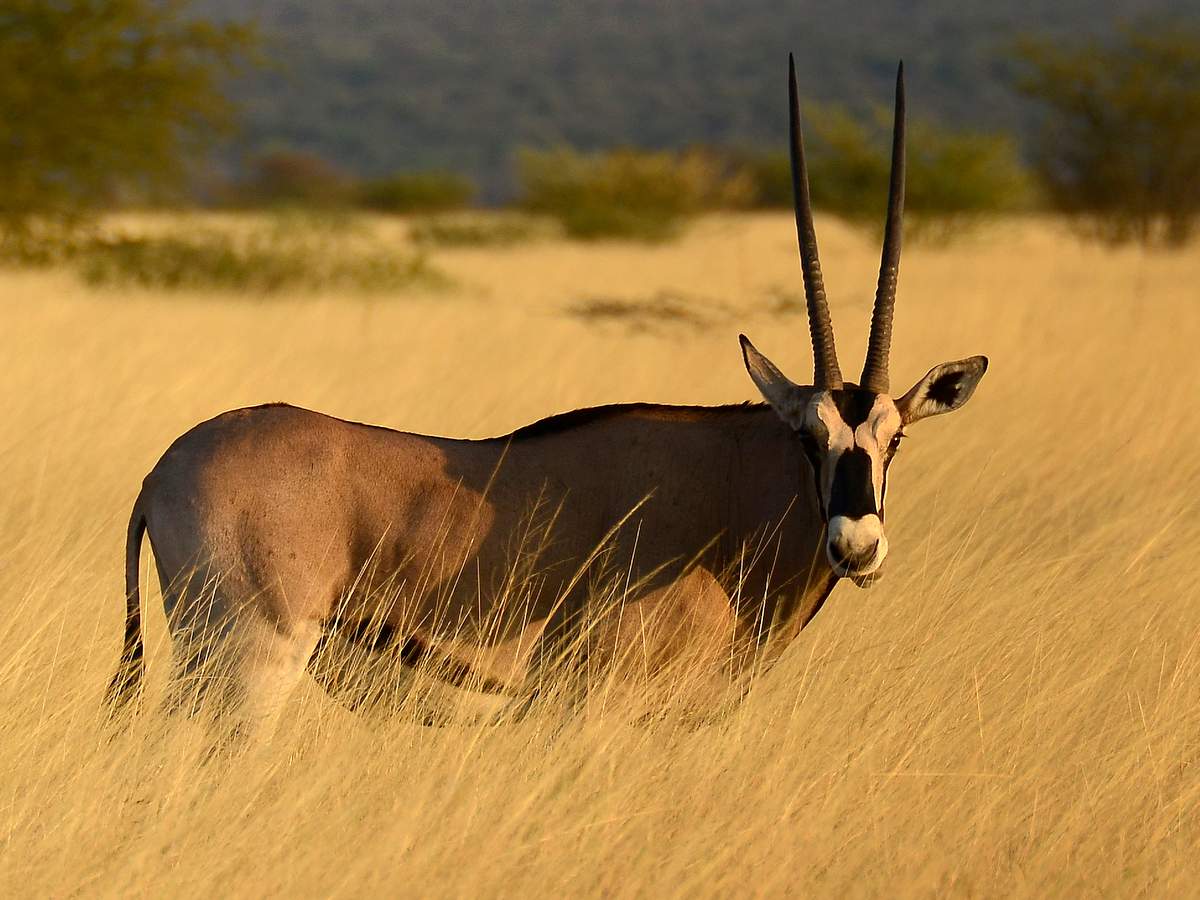 Start early and drive from Awash Arba town to the ancient walled city of Harrar in time for lunch. Take a stroll into the centre of the old city and get a taste of what we will see tomorrow. Enjoy a break and a rest before seeing the extraordinary sight of wild hyenas being hand-fed scraps of raw meat by one of Harrar’s famous hyena men. 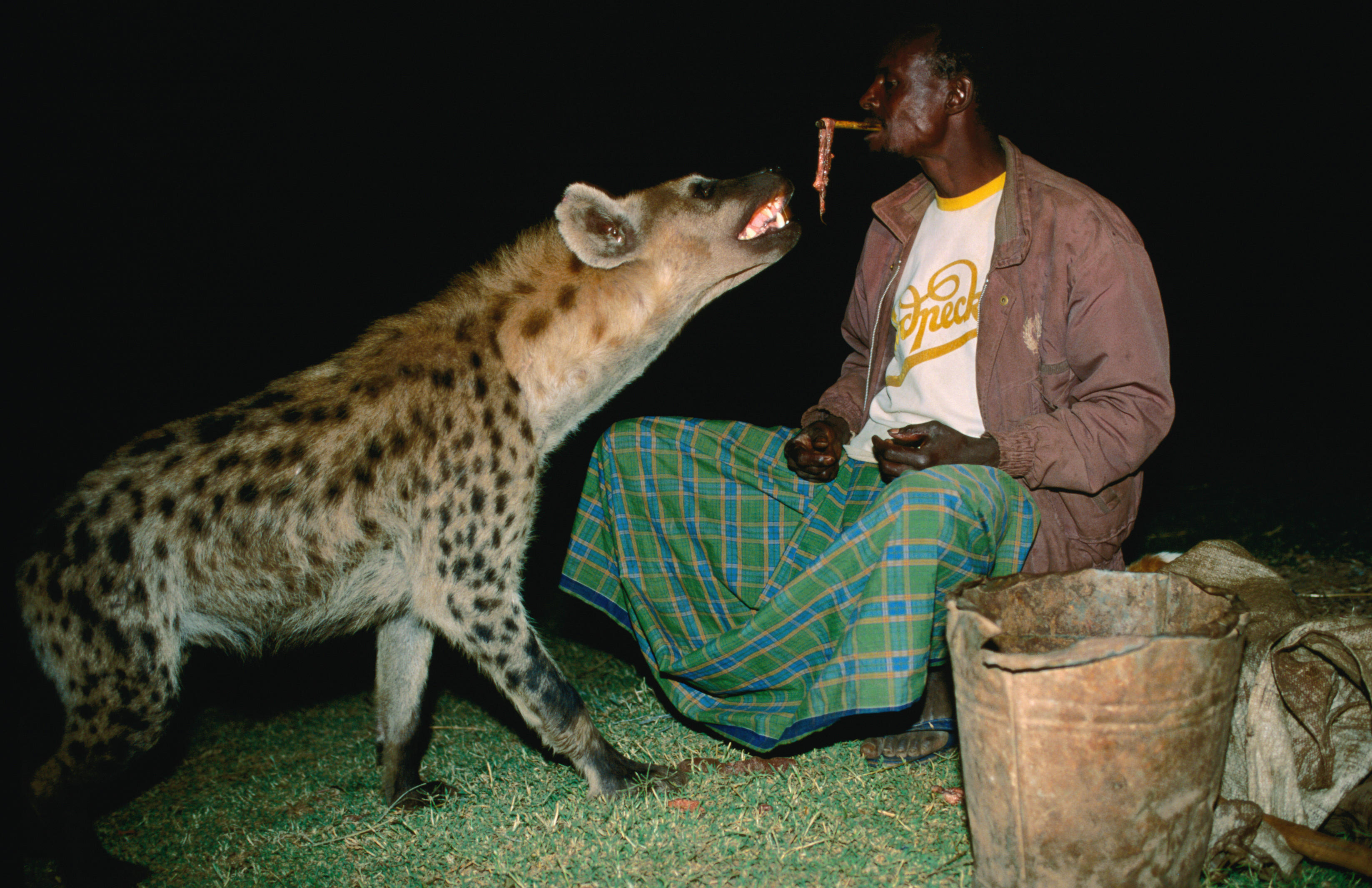 Spend the day on foot inside the old walled city known as Jugol. The 16thcentury walls have 6 gates and 368 narrow alleyways inside a square kilometre. Reflect on the genius of Peacemaker alley, see inside a traditional Harrari house, get a glimpse into Harrar’s fascinating history and culture at the museum, explore the Christian and Muslim markets, smell Ethiopia’s finest coffee bean variety being roasted and taste a sample and much more in this UNESCO World Heritage Site city.

If there is the time we can take a 1-hour drive out of town to see the interesting geological formations and rock stacks in the Valley of Marvels. 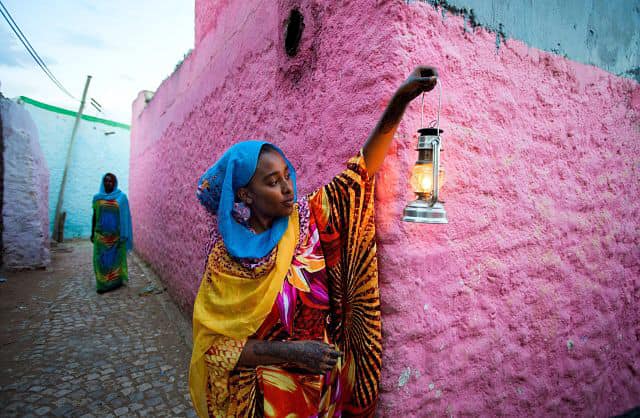 Drive from Harrar to Dire Dawa. Have coffee in Dire Dawa, maybe visit the railway museum and fly back to Addis Ababa after lunch. 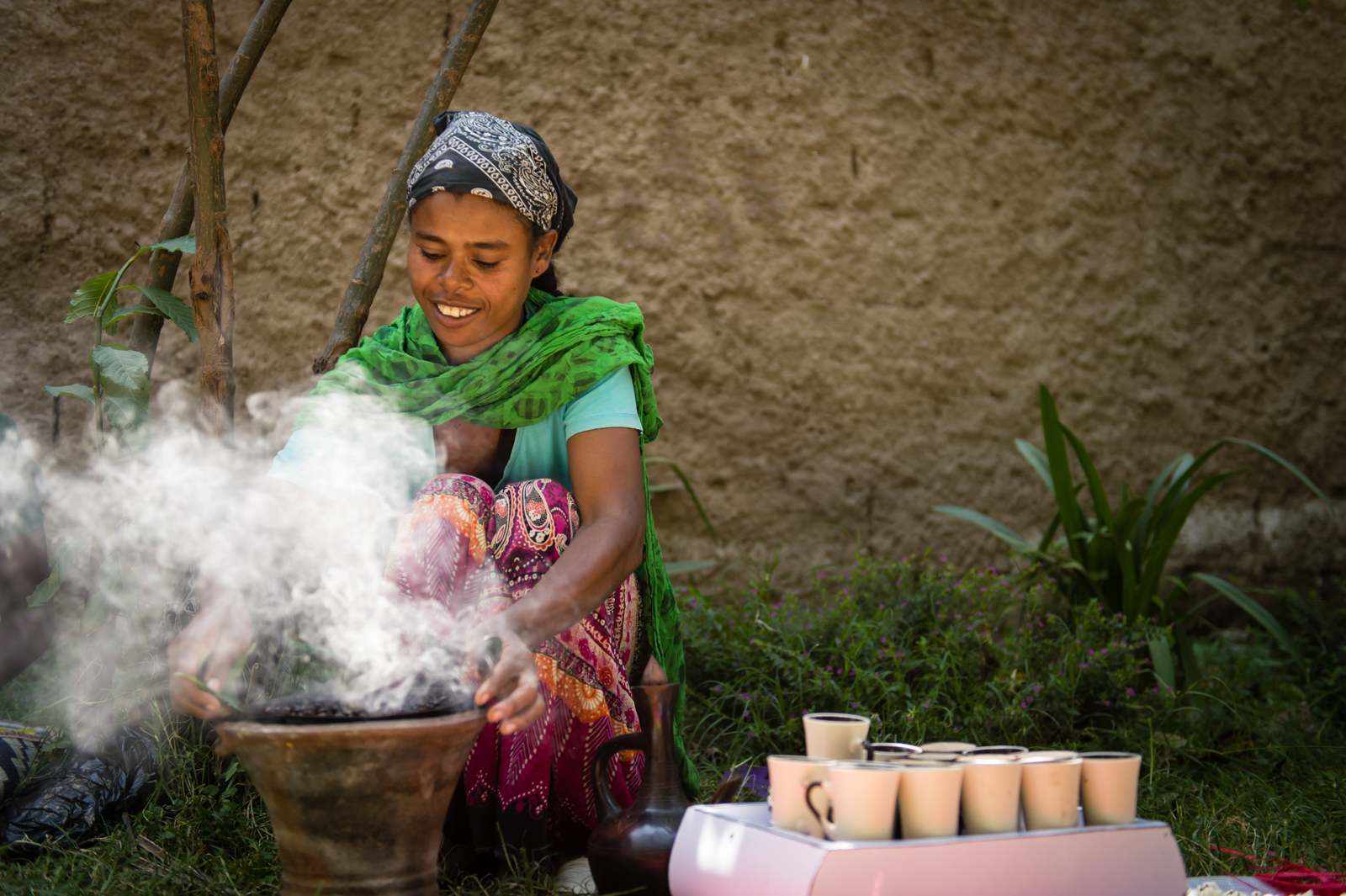 Or compare – only tour Harrar City (over 3 days)

The 4-day Harrar Tour - travels east from Addis Ababa to Harrar on good asphalt road and flies back from Dire Dawa airport.

On the way, an afternoon is spent on a game drive around Awash National Park. The Awash River cuts a gorge through this dry, dusty savannah plain. The wildlife includes 453 species of native birds and animals including the East African Oryx, warthogs, hyenas, Soemmerring’s Gazelle, Dik-dik, Greater and Lesser Kudu, Ostriches and Anubis and Hamadryas baboons. There are black-maned lions as well but these are rarely seen. There are usually some crocodiles waiting for lunch to fall into their jaws at the foot of the Awash Falls.

From Awash, we drive to fascinating Harrar.

This ancient walled city of labyrinthine alleyways is the fourth holiest city in Islam (after Mecca, Medina and Jerusalem) and a UNESCO World Heritage site. Located 500 km east from Addis Ababa in the drier and hotter eastern mountains at 1,885 m above sea level, Harrar contrasts richly with the traditionally Orthodox Christian culture of the mountainous north.

Ethiopia’s population is about 63% Christian and 34% Muslim. These two great religions have co-existed peacefully for centuries. Ethiopia's new PM, Dr Abiy Ahmed, has a parent of each religion. I’m told that Christian and Muslim people will invite each other to their churches or mosques to share in special celebrations and later eat together at the traditional banquets that often mark these occasions.

When the founder of Islam, the Prophet Mohammed (570 – 632 CE), arrived as a refugee from Arabia in 615 with a small group of loyal followers, he was given sanctuary by the Aksumite Christian emperor Ashama ibn Abjar. I’m told by Muslim friends that a grateful Prophet Mohammed declared that henceforth there should be one country to be spared Jihad – Ethiopia.

Harrar people are known for their friendliness and good humour. Harrar is a recipient of a UN City of Peace medal and is known for the history of peaceful relations between Muslims, Christians and the five ethnic groups in the region.

A very dear Ethiopian friend of mine is a graduate of Addis Ababa University School of Ethiopian Studies. He researched why and how Harrar has gained this reputation. His dream is to get funding for PhD research into how Harrar's heritage of peace could be shared cross-culturally with troubled communities elsewhere in the world. Cynics say it is all the Khat (see below) consumed by Harrari folks but my friend had a much more profound insight. If clients are interested he could join us for dinner one night.

Harrar grew to prominence as a centre of the coffee trade and because of its position on key trade routes. It came to be known as The City of Saints for its status in Islamic culture in East Africa.

Harrar experienced a cultural and economic golden age in the 16th century. The city walls with 6 gates were built around this period by Emir Nur.

In 1887, Harrar was defeated in battle by the northern Emperor Menelik II. This marked Harrar’s incorporation into the Ethiopian Empire.

The last Ethiopian emperor, Haile Selassie (b.1892 – 1975), was born in Harrar. His father was the imperial governor.

The French poet Arthur Rimbaud (1854 – 1891) lived in Harrar setting up as a coffee trader and sometimes gun runner.

Harrar’s economy declined after the completion of the Djibouti to Addis Ababa railway line in 1917. Investors wanted to avoid the cost of building a railway line through the mountains to Harrar. A new city called Dire Dawa was established as a railway town on the lowland plains 50 km from Harrar. Dire Dawa and Addis Ababa are 2 federal city-states in the Ethiopian federal republic.

Harrar was captured by the invading Italians in 1937 but liberated in 1941.

Despite fame as a centre of the coffee trade, Harrar has, in recent years, seen huge growth in cultivating the legal, narcotic leaf known as Khat (Qat or Chat). This mild stimulant that is said to induce euphoria, confidence and sleeplessness is exported throughout Ethiopia and across the Red Sea to many middle eastern destinations.

Farmers make much more from Khat than coffee. Khat is sold in bundles of leafy twigs that look like a bouquet with no flowers. Individual leaves are slowly plucked and chewed releasing the active ingredients. Khat eaters gather the chewed leaf in their cheeks creating an odd bulge like they really need to see a dentist. The teeth and saliva go green. The freshest Khat fetches the highest price. Some say it can be addictive and is open to abuse. Some use Khat in Muslim worship to stay alert into the early hours chanting sacred songs and prayers and reciting from the Quran. Khat has been used for thousands of years in this region.

Harrar is also known for it's two large breweries. Heineken bought a privatized state brewery some years ago and now exports their entire production of ‘Hakim Stout’ to niche markets in Europe making it impossible to buy this beer anywhere in Ethiopia outside Harrar.

The Hyena Men of Harrar have been hand-feeding raw meat and bones to wild hyenas outside the city walls since the 1960s. This is quite an experience and a unique photo opportunity. The hyenas have become used to closer contact with humans and will respond to the hyena man’s calls as the sun goes down.

Harrar is known for its various markets including the Christian, Muslim, Recycling and Meat markets. These are fascinating to walk around with our guide. Large areas of the market are covered by shade cloths and it would be easy to get lost in the complex network of passageways between the stalls.

The square kilometre of the old town centre within the city walls is a vehicle-free zone as the 368 alleyways are too narrow and winding. What a pleasure it is to walk around a lively city with no cars or crazy traffic. The narrowest alleyway is known as Peacemaker Alley. It has an ingenious purpose.

Come and find out what this tells you about the local people. 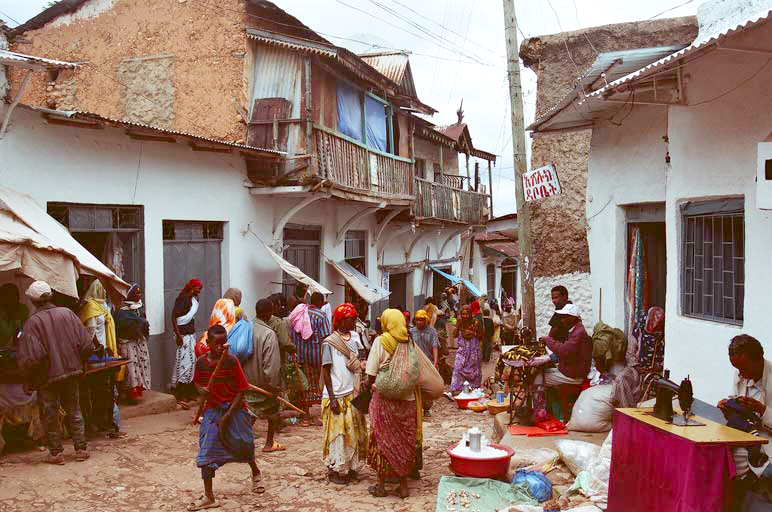 This tour will run any time with a minimum booking of 2 travellers.

Significant discounts are available for bookings of 4 or more travellers.

Per person, sharing a twin or double room.

If a single bed room is required, there is an additional Single Supplement cost of US$60. 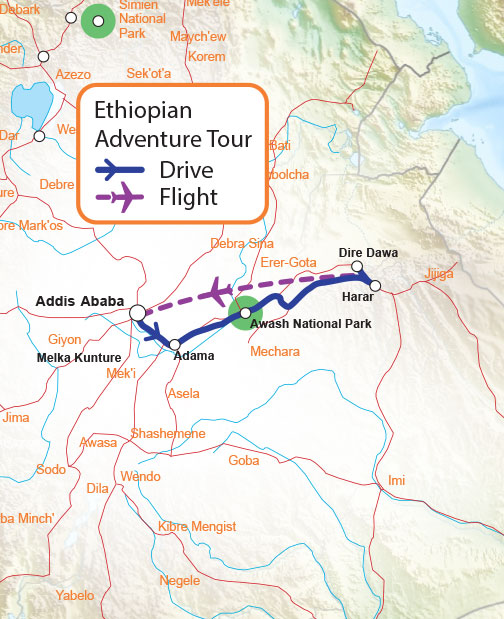 If you arrive in Ethiopia on Ethiopian Airlines International your domestic air tickets can be discounted by up to 40 - 50%.

This discount can be passed on to clients who provide a passport scan and inbound Ethiopian Airlines International ticket details.

Please complete the form below.
Sam will communicate with you directly to book and help answer any questions about your Ethiopian Adventure Tour. 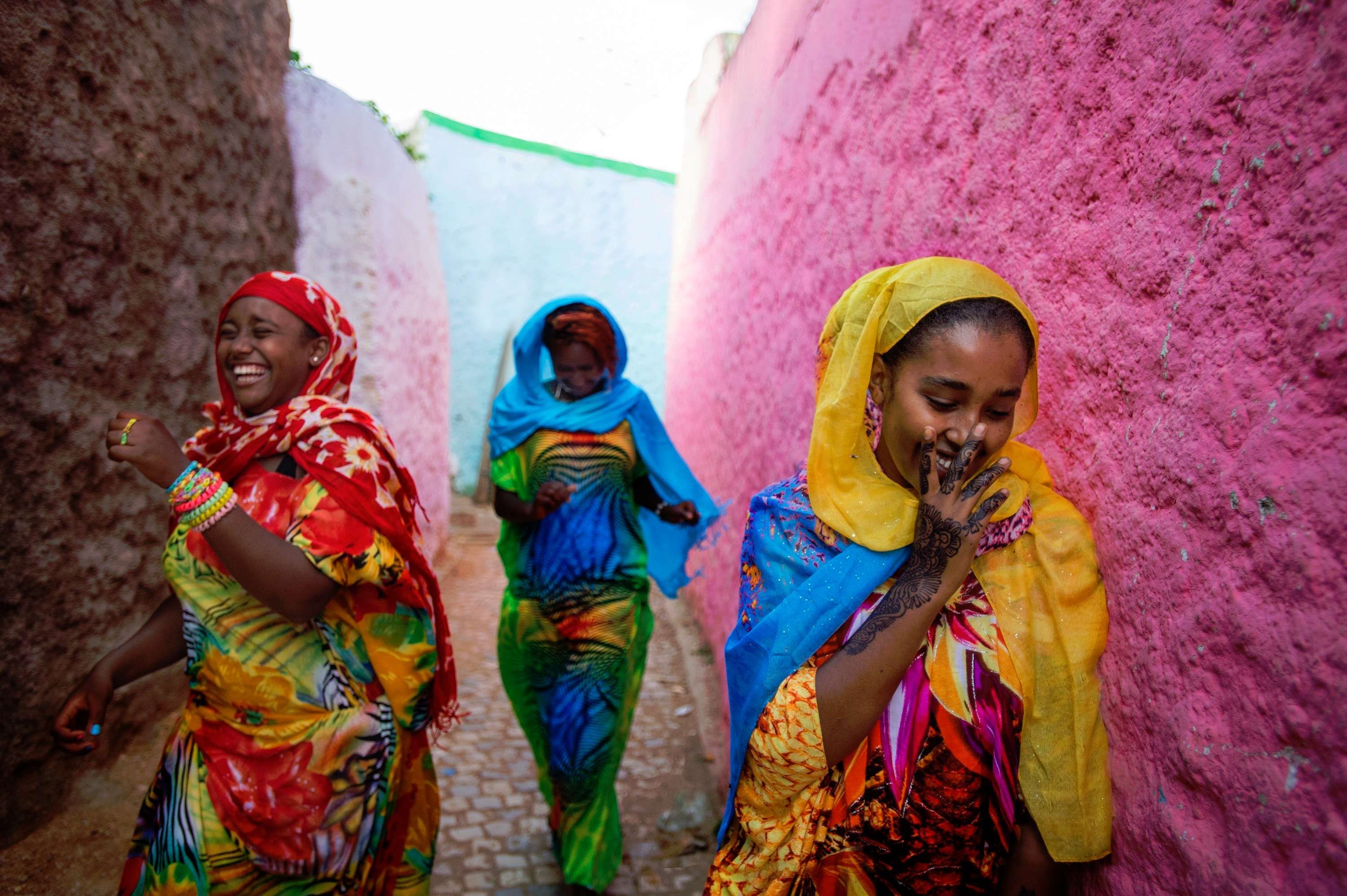 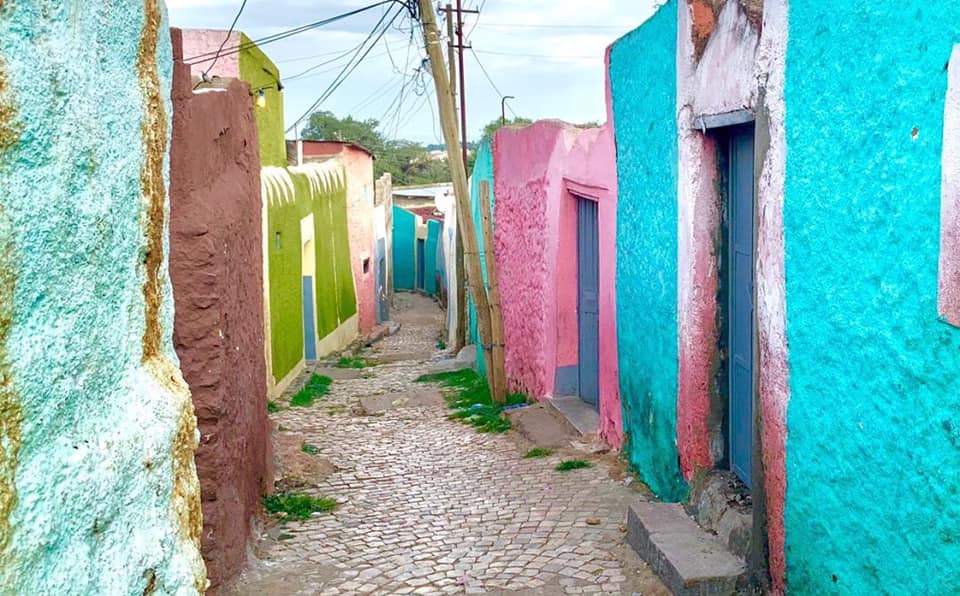