Show Me My Country of Ethiopia – Part 1 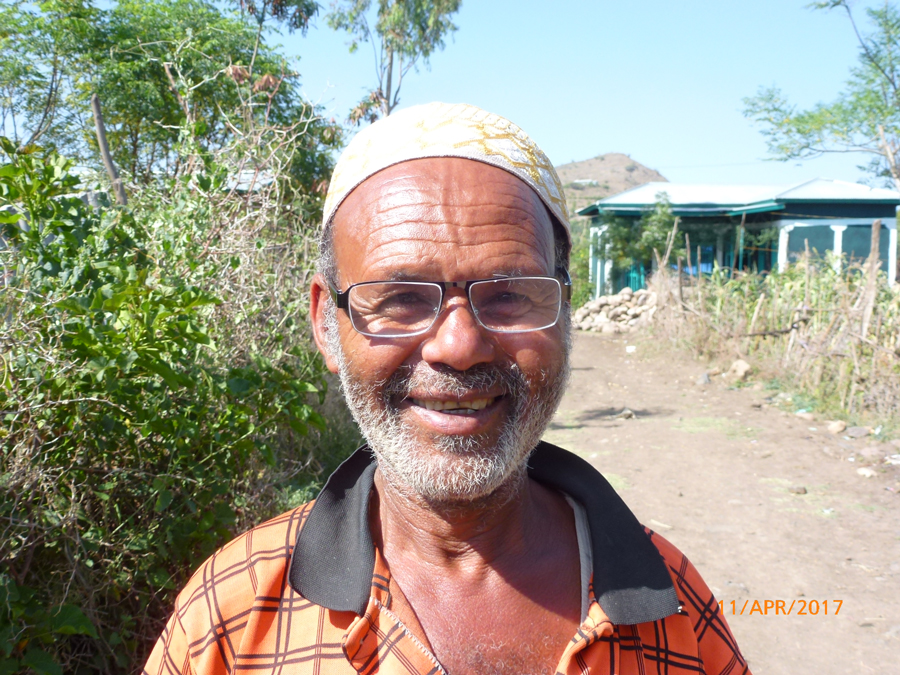 In April 2017, I fulfilled a promise to an old friend.

I’d been regaling my dear old friend Mohay with stories about the incredible places in his country that I have shown to international travellers. Travel to Ethiopia has never been easier, and increasing numbers of foreign visitors choose an Ethiopian adventure as an African destination.

I showed him photos of places that are legendary in Ethiopian and African history. Ethiopian tours will always highlight the castles in the Royal Enclosure at Gondar, the pre-Christian monolithic stelae in the ancient capital of the Axumite empire, and Lalibela, the holy city with 11th century churches carved from solid rock. Mohay was particularly impressed by an image of a tree full of red Carmine Bee Eaters on the shores of Lake Tana.

“One day you must take me” he said. “Show me my country. I have always wanted to see these famous places.”

“I will, I promise. One of these years.”

In 2017, the opportunity arose to make good on my promise.

Mohay is about 60 years old with tight salt and pepper curls around the side of his smooth head. Ethiopians don’t traditionally celebrate birthdays, so age is an estimate. He is of slightly less than average height, with an open face that draws you towards him. Mohay supports his wife Fati and their 11 children by subsistence farming. They were lucky that all 11 survived childhood, but they cannot all be farmers as fertile land is in limited supply.

Vulnerable people tend to have larger families because there is no welfare or pension system to support parents in their older years. As a pioneering midwife in Degan in the early 1970s, my mother made IUDs available to her patients. She understood the challenges facing low income families trying to make ends meet with many mouths to feed. For the first time, local women had choice in planning their families.

Recent improvments in health and food security mean that more children survive to reach adulthood. Many of this generation take the risk of having smaller families. This means fewer mouths to feed but the parents are more vulnerable in old age. Who will support them if their kids don’t survive childhood?

Ethiopia has the second highest population in Africa with 104 million next to Nigeria’s 191 million. The population is still rising and the economy has grown considerably in the last 20 years. Population growth is linked to economic development, food security and better healthcare. I hope these improvements will lead to slower population growth and a more secure future for all Ethiopians.

Life got tougher for Mohay three years ago when he had a stroke that severely affected his left side. Long story short, we found a German doctor in Addis Ababa whose treatments, including electromagnetic stimulation of the nerves and muscles, greatly increased the mobility of Mohay’s left arm and leg. He relies on friends and neighbours to help him till the land and manage the harvest. Mohay has returned from the brink of helplessness, and for him, everything is now or never.

As a teenager, my parents employed him as the water boy. He spent his working week driving four donkeys three kms to the Chelaka river to fill the harnesses with large cans of spring water. He’d tip this water into barrels elevated on platforms outside the clinic, school and staff residences so it would gravity flow to taps inside.

Nowadays, the town pump pulls pristine water up from a depth of 125 metres, and a piped distribution system ensures fresh water is available at various times of the day at public water stations throughout the town. Wealthier residents pay extra for a piped connection to their house.

I was lucky enough to spend my adolescent years in this small rural town of Degan, 400 km northeast of Addis Ababa. My medically trained parents started the only clinic and midwifery unit in the area and were well known and respected. I could go anywhere and be safe because locals knew whose kid I was.

But kids can get carried away in their playful enthusiasm and accidents can happen, so my parents always insisted ‘older boy’ Mohay accompany my young mates and me. Sometimes we spent the day at the shallow Chelaka river skinny dipping in the hot sun. Other times we explored the mountain trails that lead tantalisingly between the peaks that surround the Cheleka valley and into the mysterious ranges beyond. Sometimes we hitched a ride back to Degan on a passing truck.

These expeditions bonded me with my young mates. They taught me their Amharic language, and we laughed, fought, teased and splashed each other as boisterous boys have always done.

Now the roles are reversed, and it’s my turn to accompany Mohay on an adventure far beyond his local mountains. It’s my turn to look out for him with his new physical vulnerability.

Its kind of ironic that I am the western guy showing an Ethiopian man around places that are significant in the history of his own country. But I am no visitor. Ethiopia is where my life began and is home to my earliest memories. I went there at 18 months and grew up amongst the kindest, loveliest people you could hope to meet. I learned the local language and culture by being steeped in it because my family were the only westerners in the area at the time. I feel like a local, and it is always a home coming for me to visit beautiful Ethiopia and reunite with my friends of 50 plus years.

So, in April 2017, I found myself sitting on a straw mat on the pressed earth floor of Fati and Mohay’s house. In a fragrant haze of smouldering frankincense and the smokey aroma of roasting coffee, I gratefully accept my second cup of strong, black Ethiopian coffee. I hold the small porcelain cup carefully between thumb and forefinger. It is hot and full to the brim. Eyebrows rise in surprise and brows furrow with curiosity when I ask for no sugar. Ethiopians love their sugar and spoon it into cups of black tea with lime or black coffee as if their life depended on it.

Fuelled by sugar and caffeine, the conversation gets louder as we discuss plans for our big African adventure up north.

Mohay’s son Omer and his son-in-law Hussain are keen to join us. Both are in their early thirties and fathers of young families. They have been to other regions of Ethiopia to look for work but have never been up north. 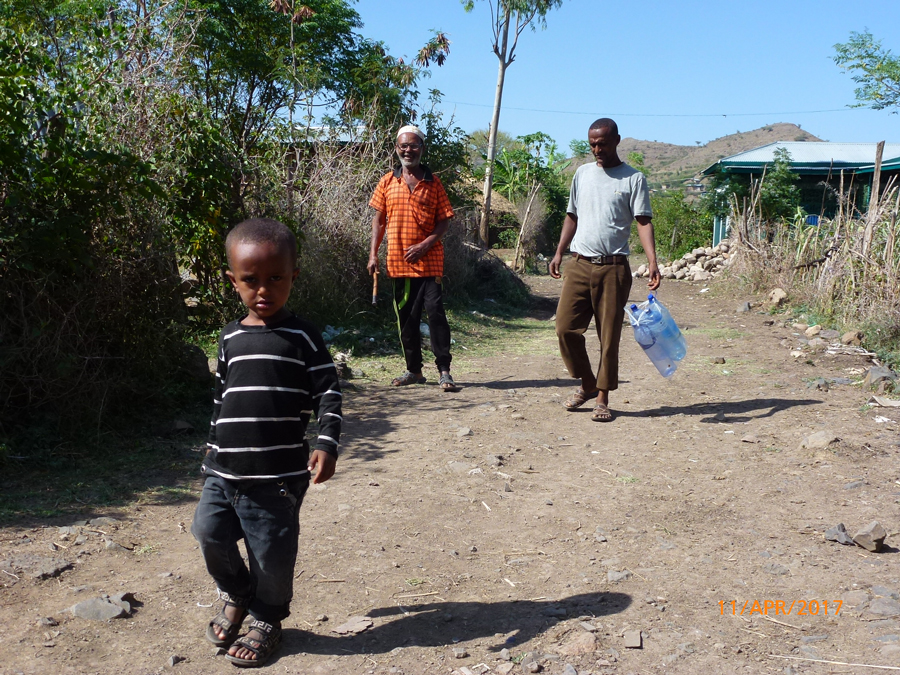 Hussain has a government licence to buy and sell household goods, which he buys from traders in larger towns up the line and brings to Degan’s twice weekly market. His wife Khadija is Mohay and Fati’s daughter. They have two young sons and have decided on a small family. Khadija is an active trader in her own right. Hussain told me he took over some of her work while she breastfed their second son.

“She is much smarter than me,” Hussain says matter of factly as he describes the complexities of her business. Khadija purchases fresh fruit and vegetables at dawn on market days and dispatches the produce on bus roof racks to her dembegnoch which literally translates as ‘besties’. Her dembegnoch run restaurants in desert towns two to three hundred kilometres away in the Afar desert. These restauranteurs pay the bus driver who returns the next day and pays Khadija. She learned this business from two of her enterprising older brothers who now live far to the east near Harar.

I attended Omer and Fati’s wedding four years ago. Yes, Fati, which is short for Fatima is a popular female name in this area! Until recently, Omer worked as a driver for a senior Chinese roading engineer while the main road through Degan was being repaved and upgraded. In recent years all main arterial roads in Ethiopia have been repaved. Now the local work is finished, the engineer has moved on, and Omer is unemployed.

Hussain and Omer tell me about their friend Awel, whose mother has lived in Saudi Arabia for many years and built a successful garment business. A couple of years ago she sent a large amount of cash for Awel to invest in his future. He bought a Hiace and set up a minibus service between local towns.

I decide to follow my friend’s suggestions and hire Awel’s Hiace on condition that Omer is paid by Awel to be our driver and Awel pays Omer’s food and board. A little surprise earner won’t ruin Omer’s week. We shake, and a deal is sealed. Awel succumbs to the temptation to join us.

So, we five guys are set for our adventure. I am the only one who has already been to the places we are going.