One of my most striking memories, as a young boy in the early 1970s, was the flight home from boarding school one year in an Ethiopian Airlines DC3. These loud, lumbering propeller aircraft were leftovers from WWII. It was the first time I saw the mountain passes from the air. My nose was flat against the window for the entire hour’s flight. I gazed down; wide eyed at the deep gorges that gave way to flat top mountains surrounded by sheer cliffs. These mountains, known as ambas, are dotted with tiny villages often perched precariously on cliff edges.

The soaring heights and plunging depths play tricks on the eyes. The ambas seem very close giving the impression of flying at a low altitude then a sudden cliff plunges hundreds of meters and one seems to be flying at an instantly higher altitude. This forces an immediate refocus down to the braided river cutting deeper into the mini Grand Canyon. Then these mini Grand Canyons converge into very grand canyons and the sheer scale of everything changes once again. It’s one stunning view after another. 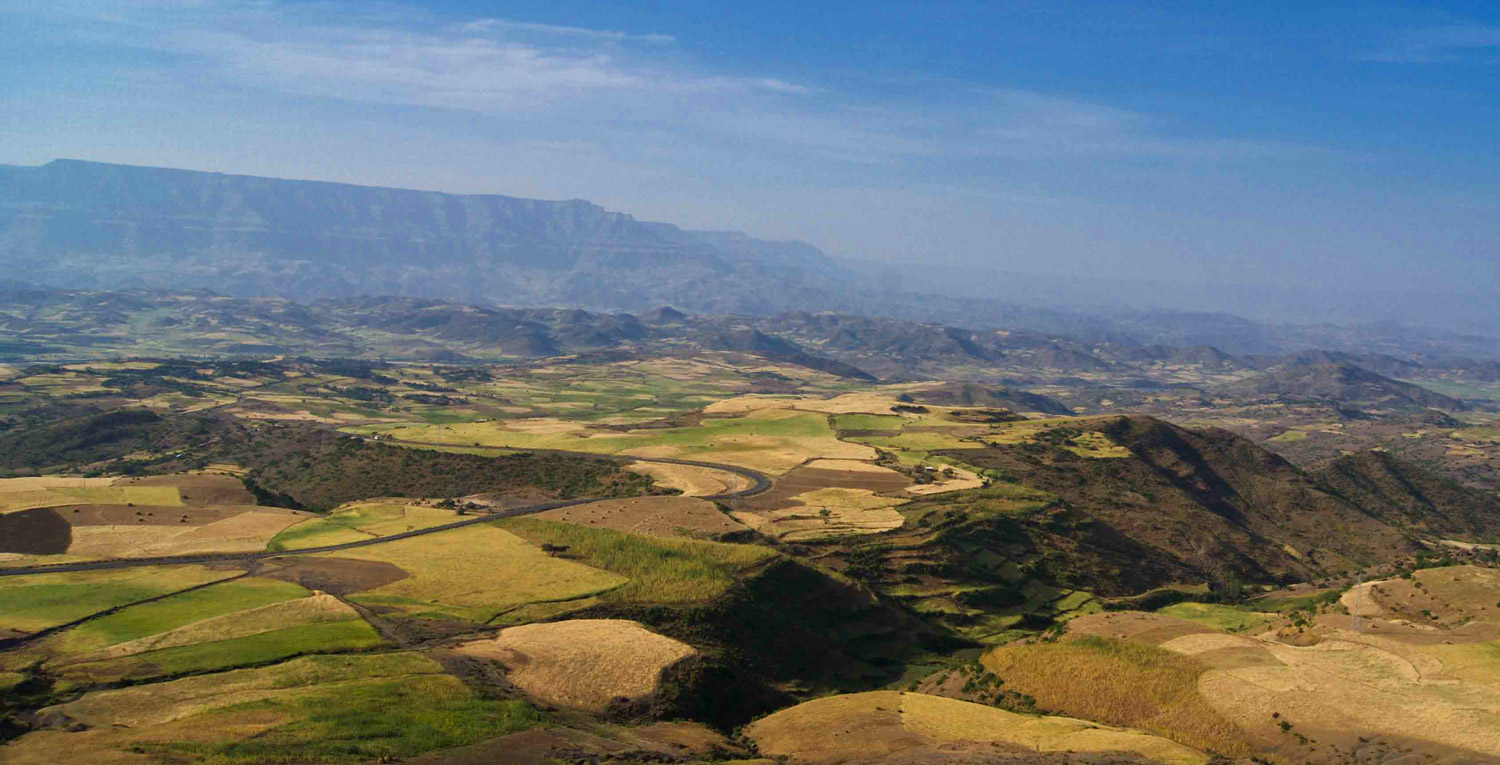 The magnificent palette of browns and greens creates a patchwork postcard best seen from the air. The circular brown roofs of the thatched tukuls cluster in small hamlets scattered across ploughed fields of mocha coloured earth and the emerald shades of crops. In those days, it was rare to see a flash of sunlight reflected off a corrugated tin roof in the mountains. Now, in a sign of improving economic times for some, and especially after rain, tinned roofs sparkle like bling against the muted tones of rock, earth and crops.

If you come on a 16-day, 17-night adventure with my Ethiopian tour company Ethiopian Adventure Tours, you will fly over terrain like this. We take three domestic flights with Ethiopian Airlines to reduce the amount of driving and to see as much as possible in a reasonable time.

These three flights are in a Canadian built, twin turboprop Bombardier Q400 aircraft that carries 78 passengers. First, we fly north about 1000 km to the ancient mountain capital of Axum where we rendezvous with our driver and vehicle that has driven up from Addis Ababa to meet us. That flight takes us up over the towering peaks of the Simien Massif. The second flight returns us south to Addis Ababa 10 days later from Bahir Dar on the shores of Lake Tana the source of the Blue Nile. This take-off gives a real sense of the expanse of this historic lake. Our third flight brings us back to Addis Ababa from Dire Dawa airport near the historic walled city of Harar.

‘Ethiopian’, as the airline advertises itself, has come a long way since my childhood.

In 2016 Ethiopian celebrates 70 years since its inaugural passenger flight. Bole International Airport in Addis Ababa is the hub for a growing network of 113 passenger and freight destinations. Ethiopian is one of the fastest growing and certainly the largest airline in Africa flying more routes than any of its African competitors. Ethiopian became a Star Alliance member in 2011 and was the first airline in Africa to fly the new Dreamliner 787. Ethiopian is also one of the few profit making airlines in Sub-Saharan Arica and for the last two years has made more profit for its government owner than all other African airlines put together.

Ethiopian has won many awards. Ethiopian won Best Regional Airline of the Year at the 41st Annual Airline Industry Achievement Awards in Washington, D.C. in February 2015. This award was only one of 21 international awards received by Ethiopian in 2015.

CEO Ato (Mr) Tewolde GebreMariam said, “It’s going to be very inspiring for all the women all over the world, aviation women and particularly the African woman. Because, as you know, here in the continent of Africa, we are lagging behind in women empowerment. So this is going to inspire all the school girls in Africa that they have a very bright future in the 21st century.”

One-third of Ethiopians employees are women. In some quarters these professional pioneers are referred to as the Daughters of Lucy.

As of 13 December 2016, a Tripadvisor rating of Ethiopian summarising the views of 461 travellers showed the following:

Personally and as a tour operator, I’m glad the national airline that my clients and I count on to get us around Ethiopia is an airline like Ethiopian. I most recently flew internationally with Ethiopian from Addis Ababa to Kilimanjaro return in early 2016 and found the flight to be excellent in all respects. That was in one of their new Dreamliners. As a tour organiser, I have always found their office staff in Addis to be courteous and professional. I appreciate their patience and thoroughness in helping me make the complex flight arrangements for each tour.

I look forward to flying with you high above the Roof of Africa on Ethiopian – the new spirit of Africa.