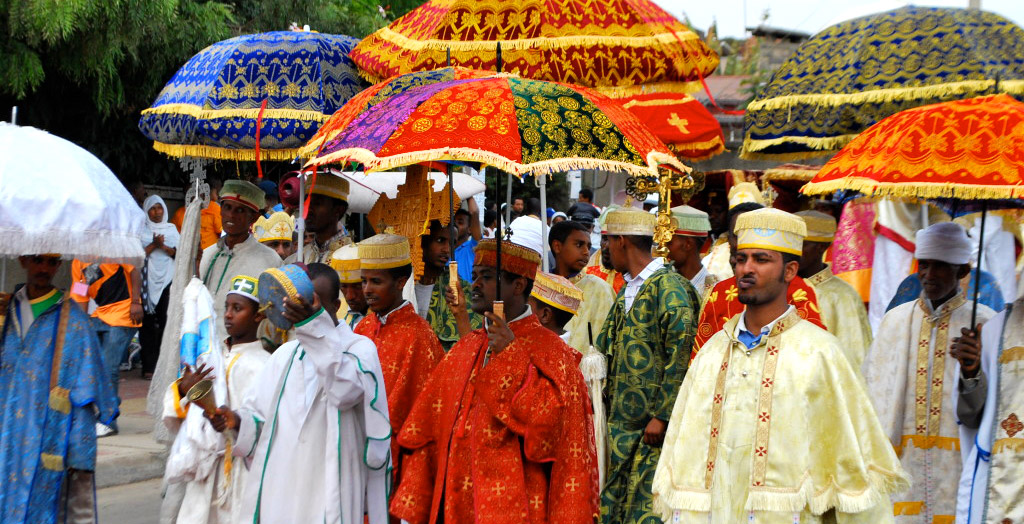 The Ethiopian Orthodox Church Christmas religious holiday is called Genna. The birth of Jesus Christ in Bethlehem is celebrated by Ethiopian Christians on 7 January in our western Gregorian calendar. This date is 27 Tahsas in the Julian calendar used in Ethiopia.

According to the 2015 Global Attitudes Survey from the Pew Research Centre, Ethiopia is the most religious country in the world with 98% of Ethiopians saying religion is very important in their lives.

The Ethiopian Orthodox Church is very old and developed in isolation from other branches of European and Mediterranean Christianity. Emperor Ezana was the first Ethiopian king to convert to Christianity in 356 AD. The legendary ‘lost Christian kingdom’, suspected to exist somewhere in the mountains of East Africa was ‘discovered’ by the Portuguese in the 15th century.

It is not just Christianity that has a very long history in Ethiopia. Ethiopia played an important role in the very early days of Islam. The Prophet Mohammed was granted refuge and protection when he fled from persecution in Arabia in 615 AD. To this day, the eastern city of Harar is known as the fourth holiest city in Islam after Mecca, Medina and Jerusalem.

Broadly speaking, there are two Ethiopian Christians for each Ethiopian Muslim in the general population, with regional concentrations of each group. Christians tend to be in the mountainous north and central regions, while Muslims predominate in the hot lowland areas to the east.

I’ve been told many times how Muslim and Christian neighbours invite each other to share in the hospitality around each other's special religious feast days. Peaceful coexistence between the two great religions is a long-standing tradition in Ethiopia.

The Orthodox Church holiday Genna is celebrated at the family level and by attendance at church services. The very devout will fast for the preceding 40 days of Advent and end their fast on Christmas Eve with the Feast of Genna. Others will fast for 24 hours before Genna.

Many churches host late night services on Christmas Eve. People walk from church to church until the early morning of Genna. Priests dress in their fine, colourful robes with gold and silver embroidery. In an ancient ceremonial ritual, the priests and deacons slow-clap, chant and rhythmically jangle their metal sistrums, to the steady trance-inducing beat of large drums. This can last for hours, even overnight, in some cases.

After all that fasting and fatigued by lack of sleep, the devout will celebrate with a large banquet for an early breakfast, washed down with cup after cup of very strong Ethiopian coffee. Two or three cups of this delicious coffee will quickly spark a room full of tired people into animated conversation and laughter.

Early on Genna morning, the streets are full of people, dressed in traditional white toga-like shammas, heading off to church. The brilliant and unsullied whiteness of it all is striking against the browns of the earth, the greys and greens of the landscape and the blue sky. January is the height of the dry season in Ethiopia.

As the day progresses, friends and extended family will gather to relax, eat and drink together. Traditional alcoholic drinks like the honey wine Tej will flow in a family oriented celebration.

A well-to-do family will buy a lamb or a goat and perhaps share this with less well-off neighbours. In the days leading up to Genna, preparations are in train. It is a common sight to see a hapless beast being hauled home, much like westerners might look out for a good deal on a turkey or large ham for Christmas lunch.

I remember being in Addis on 7 January 2016. In the days before, the streets were full of people making preparations. The busy roadsides overflowed with the usual jostling pedestrians. For a few days before Genna, extra vigilance was required to negotiate the busy crowd. This was to avoid a sudden head-butt in the crotch from a bewildered, terrified goat that could suddenly appear, dragged behind someone working their way through the throng of people. The Genna shopper pulling the short cord around the creature’s neck, looked as stressed and as focused as any Christmas-eve shopper in a Western High Street.

In the yard of Mr Martin’s guesthouse, where Caroline and I were staying between trips, the Ethiopian family who own and operate the business strung up a slaughtered sheep on the branch of a small sapling just below our first-floor balcony.

We had not long returned from town, so had been spared the sound or sight that accompanies the traditional slaughter of anything larger than a chicken. I watched as the slick operation proceeded at speed and with obvious skill. Blood dripped into a bucket, and the carcass cut into pieces. Bones, joints and organs were systematically removed. A shiny steel hand basin was piled high and carried around to the kitchen at the rear of the guesthouse. I noted that some portions of fresh raw meat were carried out through the gate to unknown destinations. I acknowledge the contradiction of the enjoyment of eating the delicious food that results and my revulsion at the act of slaughter.

Worldwide, many Christmas traditions involve church services and feasting and clearly Ethiopians have their unique way with all of that. Another unique aspect of Ethiopian Genna is the hockey-like game also known as Genna. It is usually only played at this time of year. Genna is a game played with sticks and a ball carved from wood. The object is to use the sticks to hit the ball through the other team’s goal at the opposite end of an open field. In rural areas, cattle or herds of goats may wander through the centre of play to the chagrin of the players. Ethiopians say that the Genna game dates from the first century AD because legend has it that the shepherds were playing this game with their crooks when the angel came to them on the night of Jesus’s birth.

In the late afternoon, after feasting, groups of young men will play Genna cheered on by their families and friends. Community leaders present prizes to the winners. Horse racing can also be part of the festivities, especially in rural areas.

Gift giving at Genna in the way that westerners exchange gifts at Christmas is not so common. However, this is often a time to purchase new clothes for children in the family. They will wear these to church services and at the family banquet.

Some urban Ethiopians now also celebrate Genna in ways that give the nod to the Western tradition of Christmas. This is most widely expressed in the seasonal decorations adorning shops and retail businesses in Addis Ababa. Attached is a photo received yesterday from our Ethiopian friend Gamme in Addis, wishing us ‘Happy Genna’ for 7 January 2017.

In the same spirit of respecting tradition and accommodating the new, I wish you, dear reader, a Happy Genna – where ever you are and whatever your religion or culture.